Your ship crashlanded on an alien planet and you're the only survivor. You must manage the crumbling station's controls to survive the hostile aliens that will kill anything in their path.

(Must be played with a keyboard)

Press 1 to see the full controls!

The main objective is to keep the aliens from entering your control room (the yellow square) for as long as possible.

Rooms are shaped like a QWERTY keyboard. You can open or close their doors by pressing their corresponding key. Careful, the more doors you are using, the higher is the chance that one will break. Rooms with broken doors will continuously blink red.

Cameras can randomly break! Rooms with broken cameras will be shown as pitch black, no matter what might be lurking inside.

Aside from the doors, you must also manipulate the ship's systems if you want to stay alive! You can only use one at a time, so make sure to turn them off after they've served their purpose. The systems are each assigned to a number on the keyboard, they are:

2 - IF bait: Turns on an infrared light that will lure the red aliens your way and make the violet aliens flee from you. Can only be used once before it needs to be fixed.

3 - UV bait: Turns on an ultraviolet light that will lure the violet aliens your way and make the red aliens flee from you. Can only be used once before it needs to be fixed.

4 - Fix door: Randomly fixes broken doors inside the station. Turns off your ability to interact with doors while it's turned on. Takes a few seconds to start up.

5 - Fix camera: Ramdomly fixes broken cameras inside the station. Takes a few seconds to start up.

6 - Fix bait: Fixes your baits so you can use them again. Takes a few seconds to start up.

The two kinds of alien are hostile to each other. Use all of your resources to trick them into fighting among themselves so you don't get overwhelmed.

One more thing! A lot of people seem to be confused about error noises that occur when trying to do certain actions, so here's a little explanation of what might be causing them.  The error noise can be caused by a couple of things:

- You tried to activate a system (numbers 1 to 6) when there was already an active system. You can only have one system working at once, so you need to turn off the last system you used if you want to use another one.

- You tried to use a door in a room which had a broken door (blinking red), or had something inside it (player or an enemy). You can only use doors in rooms that are empty and have a working door.

- You tried to close a door while the door fixing system (system with a wrench icon) was active. You need to deactivate that system if you want to use doors.

- You tried to use a bait (numbers 2 and 3) while they were deplenished (button was orange). You need to use the bait fixing system (number 6) to replenish your baits before you use them again.

- You tried to have more than 5 doors closed at once. The limit is five, you need to open one if you want to close another.

This is our first jam so feedback is really appreciated!

Just unzip the file and double click the .exe

have to PRIORITIZE recovery! 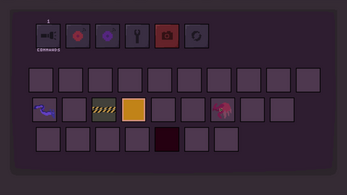 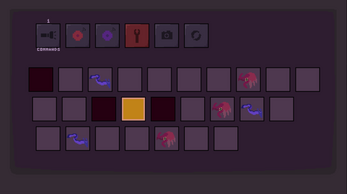 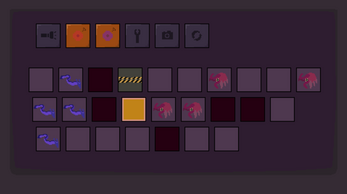